LEWIS HAMILTON was forced out of the Belgian Grand Prix after an accident with Fernando Alonso on the first lap.

Lewis Hamilton has claimed he “doesn’t care” after Fernando Alonso called the Mercedes star an “idiot” after their lap one crash at the Belgian Grand Prix. Hamilton swept around the outside of Fernando Alonso in a bid to take second place on lap one.

However, the pair made contact at Les Combes with Alonso’s front-wing smashing into Hamilton’s rear-right tyre. The impact chucked the Mercedes into the air with Hamilton forced to retire half a lap later.

After the accident, Alonso blamed Hamilton as he swiped back at the seven-time champion. Speaking over his team radio, Alonso said: “Yeah, what an idiot! Closing the door from the outside. I mean, we had a mega start but this guy only knows how to drive and start in first.”

Hamilton accepted the blame for the shunt as he recorded his first retirement of the season. He told Sky Sports F1: “No. Looking back at my footage, he was in my blind spot. I didn’t leave him enough space. It’s my fault today. Just so sorry to the team.

Lewis Hamilton has taken the blame for his lap one crash (Image: Getty / Sky Sports F1)

“It doesn’t really matter he said that. I don’t really care. It was my fault. I couldn’t see him actually. He was right in my blind spot. Just recuperate, get back on the treadmill.”

The crash came after both Hamilton and Alonso jumped Sergio Perez after a poor start for the Red Bull driver. Hamilton had a great run on the Alpine down the long back straight and looked set to secure P2 before the contact. Hamilton’s retirement means the former Williams man will extend his championship lead over his more experienced team-mate to over 20 points. Ahead of the race, Hamilton admitted he had stayed behind at the track until past midnight to try and work out some of the car’s issues.

It comes a day after Hamilton stressed he would not miss his 2022 car as the team continues to struggle to match the frontrunners. Mercedes boss Toto Wolff was angry ahead of the Belgian Grand Prix and admitted the team were already looking ahead to next year’s design.

He commented: “​​I think it’s clear the reaction from Lewis, the car was undrivable yesterday. It’s clear that our drivers don’t want anything to do with this car anymore. We need to find the right compromise because we’re still trying to find out what is happening and then next year’s development.”

Wolff added: “We are lacking the answers. You cannot have a car that’s on pole in Budapest, albeit a very different track and different conditions, and then suddenly be almost two seconds off. So we need to look into data, dig deep and find out.” 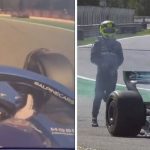