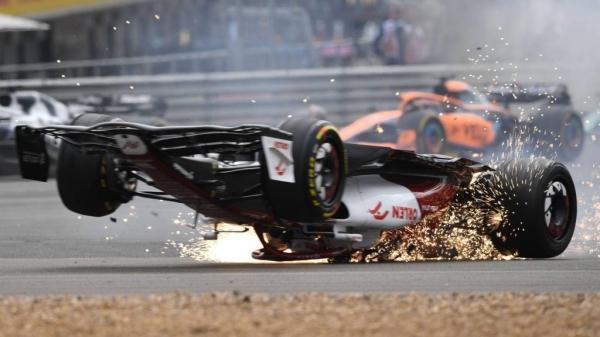 Watching Zhou Guanyu’s crash at Silverstone play out, Martin Brundle thought at the time he was actually surprised that it didn’t “happen more often” in Formula 1.

Zhou was involved in a horror crash on the opening lap of the British Grand Prix, the Alfa Romeo flipped upside down in contact with George Russell.

Sliding across the tarmac in a shower of sparks, Zhou went hurtling through the gravel where his car dug in and was again flipped, this time over the tyre barrier and into the catch fencing at Abbey.

Thankfully the driver was unhurt, Zhou eager to get back in the car at this weekend’s Austrian Grand Prix.

But while his fellow drivers and pundits alike have all praised Formula 1 for its strides forward in safety, Brundle says he is amazed this sort of crash doesn’t happen more often.

The reason being, this year the drivers have freedom to choose the tyres they want at the start of the race and that means some, such as Russell was on Sunday, are on much slower tyres than the rest of the pack.

“In some ways it was one of those ‘I’m surprised that doesn’t happen more often’ crashes as the cars weave their way down to turn one in close formation,” the former F1 driver said in his latest Sky Sports column.

“It was compounded by the fact that all three available tyre compounds were involved in helping some launch very well, and others like George Russell on the slower hard compound tyre, struggling off the start line.

“From this year the top 10 are no longer obligated to start on their actual qualifying tyres, and so this can lead to a mismatch of launch capability in the front half of the grid as well as the rest of the pack, meaning some are rapidly gaining ground and others falling back.

“Russell appeared to misjudge how far alongside Pierre Gasly was, which is challenging whilst also carefully watching the mayhem ahead and controlling your own car and gearshifts.”

But that Zhou’s car was flipped, Brundle says that was “extraordinary given how low the centre of gravity is on these cars.

“The regulations state that an F1 car and its driver must weigh at least 798 kgs and so on the start line cars fuelled for the race are now over 900kgs. Add in a turbinelike 1000 horsepower and, as we witnessed with Romain Grosjean’s fiery accident in Bahrain 2020, there’s a huge amount of energy to contain which circuits are only just about coping with.”

As Zhou’s crash played out there was another further down the field with Alex Albon nose-first into the concrete barrier on the pit straight. Unlike Zhou, who was kept in the medical centre for observation, Albon was airlifted to a local hospital for precautionary checks.

“Alex Albon was turned into the pit wall in his Williams and took a harder hit than Zhou,” Brundle explained. “As ever the spectacular crashes dissipate energy over a much longer period and providing nothing enters into your cockpit then you are less likely to be hurt, such as with my shunt in Melbourne in 1996. It’s the sudden stop which really hurts. 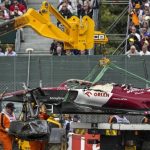 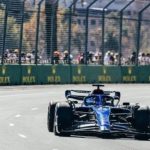